Airstream Caravans To Be Sold in Australia

The abundant sales of caravans in the country comes as no surprise because Australia is home to many great camping sites. Jayco, one of the leading names in the business, will now be selling Airstream Caravans.

Airstream Caravans have been sold in the country in the past but it didn’t get the exposure it deserves. Now, it will be available in five Jayco stores, three more than its previous distributor.

What’s more is that a new and improved version of the Basecamp will be made available early this year with three more Airstream arriving later.

If you are in the market for a new caravan, consider getting your caravan finance sorted out now so that there is no delay when the new Airstream range of caravans become available in Australia. Please also see our article on the 5 top leisure loan considerations to ponder before committing to receiving finance.

With a tare weight of just 1200kg, the Basecamp has managed to stomp on its competition. It has a convertible bench that can comfortably fit two people plus it also has good ventilation because its two windows with screens can be tilted to let the air in.

The galley is equipped with essentials like a foldable sink, microwave, 2-burner stove and a lot of storage space. On top of that, it also comes a renewable power source via its pre-wire solar kit. Makers have also made it easy to use water from the trailer as the shower can be used inside and outside. They even paid attention to the toilet by choosing a porcelain one!

Airstream wants every model to exceed expectations. The Basecamp would be more affordable than their other units but it’s certainly just as competitive. It will make its debut in the Victorian Caravan Supershow on February 21-26.

While news about the latest version of the Basecamp is welcome, there are more Airstream trailers to be released later this year. It’s best to get reacquainted and find out exactly what ingenuity, luxury, and comfort these caravans can offer. 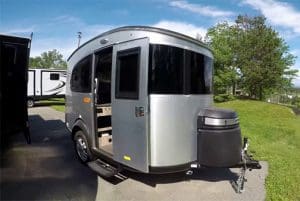 This trailer gives you a choice between two different floor plans. The front bed can accommodate 2-3 people while the club lounge can accommodate 2-4. Whether you like taking more people with you or loading the caravan with bikes or kayaks, there’s going to be enough space for everyone.

The 579 sport has a refrigerator, 2-burner stove, sink, a lot of cupboards and enough room for movement. Same could be said for its bathroom with a sink, shower and, a porcelain toilet.
Camping isn’t meant to make you feel like you’re sleeping in a cramped box. You get air conditioning and heating systems to get the right temperature making your stay as comfortable as possible.

Best of all, Airstream trailers are all fuel efficient. 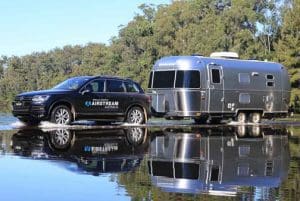 The bamboo-inspired flooring of the 624 is meant to make anyone feel at home. The galley has essentials like a fridge, microwave and, a 2-burner stove. And just beside it, is a dinette big enough for 4.

There’s one bed good for two people permanently set up and the dining area can be converted to another bed for two people. All in all, it can sleep 4 with ease. Entertainment would be just as important when you want to go away for a while and you can pop in a CD, watch a movie or your favourite show on the LED TV, also included in the trailer.

The bathroom is still the same with its shower, porcelain toilet, and a sink. However, it now comes with a countertop and is more spacious, making it much easier to move around. 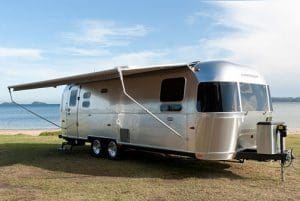 This is Airstream’s largest and most extravagant trailer made available in Australia. It has a dinette for 4 or more people. And when they’re not eating, they can keep themselves entertained with the LED TV. When it’s time to call it a day, just convert the dinette to a bed good for 2.

In the galley, you’ll find the usual set up—and more. You have the sink, microwave, a 3-burner stove and an oven. They really took things up a notch with this, and rightfully so.

Now, you’ve got the dining area sorted, you can focus on the bedroom. There’s another TV in the bedroom, air conditioning system, plenty of storage and a big enough bed for two.

The bathroom still has the same porcelain toilet, shower, and sink but it now has more space for movement and storage. Another great addition is the fan inside that would make it comfortable to shower during the summer months.

These trailers are very sleek and have always been praised for its designs. It’s quite pleasant that its inside matches just how good it looks outside. To prove that statement, Jayco owner, Gerry Ryan just tested its versatility when he converted his Airstream trailer to use it for his mobile catering service.

But these stories don’t do much because only you can be the judge. So, don’t miss the debut of the Basecamp in the Victorian Caravan Supershow. You can inspect the trailers up close and start picturing your next adventure. But if you can’t make it there, you can always drop by a Jayco store and wait for news about their Airstream trailers.

At Finance Ezi we offer low interest rate caravan loans with super fast approvals. We pride ourselves on finding you the best deal on caravan finance that is suitable to your financial situation.

ShareTweetPin itShare
Previous
Owning A Helicopter: What Does It Involve?
Next
Fixed Rates vs Variable Interest Rate